This weekend, I was gifted with the pleasure of attending a screening of “Saving Mr. Banks” on the Walt Disney Studios lot with a Q&A session with Emma Thompson, Tom Hanks, Colin Farrell, Bradley Whitford and Jason Schwartzman. ….. Incredible!

The Movie:
How was the movie? I loved it! Maybe I’m biased because of the circumstances in which I saw it for the first time, BUT…. I think it is a beautiful film.  I laughed. I cried. And so did the whole audience. I won’t spoil it for you. Just go see it!

The Q&A Session:
After the movie was over, these five actors filed out, greeted by a standing ovation, to sit in front of us for a little Q&A. To me, one of the incredible powers of film is that it creates this intimate relationship with the people on screen. I expected to be awestruck, being in the presence(3rd row) of these celebrities. Instead, when the actors sat down in front of us, I felt like I was finally having a personal chat with my old friends. They were so candid, friendly, and humble. Here are a few moments I will cherish:

What an incredible experience to watch a movie about storytelling, in a theater filled with storytellers, on the studio lot where the story was told, and meet the storytellers of that movie afterwards!!! …… (Speechless)

At a crucial moment in the movie, Walt Disney looks earnestly into P.L. Travers eyes, and says, “George Banks will be redeemed. George Banks and all he stands for will be saved. Maybe not in life, but in imagination. Because that’s what we storytellers do. We restore order with imagination. We instill hope again and again and again.”

The reason we read books, go to movies, 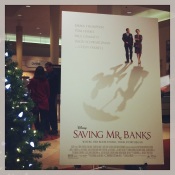 I don’t know about you, but these inspiring moments don’t happen all that often. Maybe it isn’t that they don’t happen, but that sometimes I have to look harder to find them. Often I get bogged down in the days when nothing exciting is going on. We usually don’t advertise those days, do we? But on those days, I want to remember these moments that lift my spirits and make the impossible possible. When I stop to think… I’ve had more of those moments than I realize.

What are your inspiring moments? Remember them. Keep them close.